August 15, 2019
I'm honored to have been asked by Sam & Hema to be a keynote blogger for the conference. Make sure to catch up with all of the wonderful blogs, videos and tweets shared so far at The Virtual Conference on Humanizing Mathematics.

I've been thinking a lot lately about math as a human endeavor, and more specifically, how we humanize (read: make accessible, comfortable, welcoming to ALL people) a subject that has been historically considered a masculine endeavor. It's hard for me to wrap my head around the fact that a Google search for "famous mathematicians" in 2019 returns this slice of mostly old, dead, white-guy-centric history: 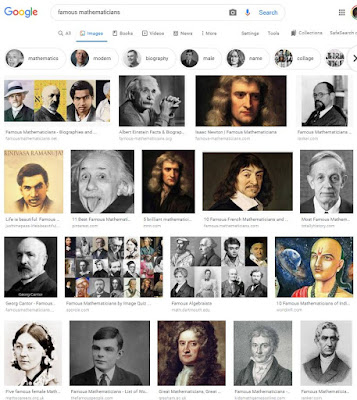 Don't get me wrong. These (mostly) men above made fantastic, famous contributions to mathematics. But what baffles me is the glaring omission of the women who have made equally important and impressive impacts on the field. So, my act of humanizing mathematics is to change this narrative. Lately, I have been working intentionally to spread awareness of mathematics as a feminine endeavor and take action to make math a place where women belong and are treated that way.

About a year ago, my 9-year-old daughter and I started reading Power in Numbers: The Rebel Women of Mathematics by Dr. Talithia Williams. It contains stories of amazing women who have pursued math in the last two millennia - yes, millennia. It turns out that women have been doing mathematics as long as men have, though history certainly doesn't make this systematically well-known. As my daughter & I read together about women who were passionate pioneers in their fields, my daughter turned to me and said, "Why didn't I know this before?! Everyone should know their names!" And the #MathGals project was born.

Together, we chose the names of nine women from near and far history who have made important contributions to math to put on a t-shirt. What better way to spread the word than to wear their names? 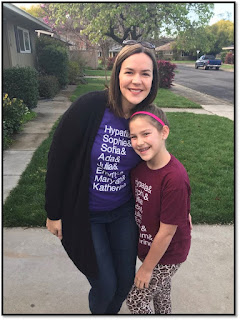 It was important to us that their first names appear on the shirt because many women in the past had to study math under the guise of a male pseudonym. Our hope was to start conversations with friends, family, and perfect strangers in elevators. And from people coming up and asking "who's on your shirt?" to side glances that inspire us to ask, "are you wondering who these names belong to?", the attention has continued to grow. Two t-shirts have turned into almost 1,000, and the #MathGals movement has taken on a life of its own, largely thanks to the brilliant creativity of the math Twitter community. #MathGals has stickers (thank you @jenny_wales!), classroom displays (thank you, @MissMath_Teach, @KyneCasey, & others!)... 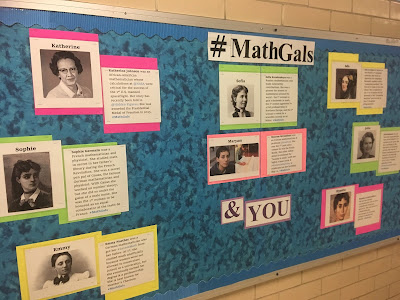 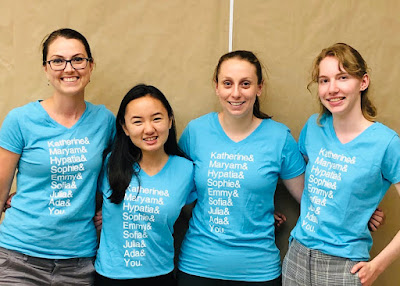 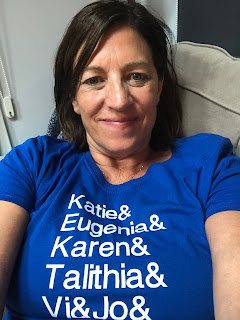 ...and so many ideas for how to spread the word even further & being to impact the lives of young female mathematicians.

I recognize that getting to know the names & stories of the women who paved the way and are making a difference in math today is just the first step in feminizing mathematics. A little research will show that I'm not the first to rally around bringing awareness to the women in math movement. Popular media even jumped on board with the release of the Hidden Figures movie in 2016. The stories of female mathematicians are often focused on how they were/are courageous, rebellious, persistent, unwavering, pioneering, etc; and this makes me both proud and sad. Proud, because these women who have come before us have put in considerable work to change math from a men's club to a human endeavor. Sad, because in many places, it still takes rebellion for women to pursue mathematics (in its many forms) as a career.

We're still experiencing a distinct lack of women choosing to specialize in math. Despite an increase in the number of women pursuing STEM majors in college in recent years, we are still a minority in STEM careers - only 28% in 2018, according to the NSF. Women leave STEM careers at an alarming rate, largely due to not being treated like or feeling like they belong. It turns out that getting girls interested in math & science is the easy part. Committing to treating them as if they belong, it turns out, is the hardest but most important part. Some emerging research suggests changes in physical environment, messaging, collaboration opportunities and mentorship could positively impact women’s belonging. I’m interested in how we establish and sustain belonging from a girl’s earliest math experiences throughout a career, and am looking forward to lots of conversation about this from the math community.

In closing, I humanize math by feminizing math. The #MathGals effort isn’t about pushing anyone out; it’s about making sure there’s room and respect for everyone. It would take an infinite number of shirts to honor all of the women who have made math theirs, so we’re starting with a handful as we grow awareness and work our way towards a world where #MathGals are the norm.

Popular posts from this blog 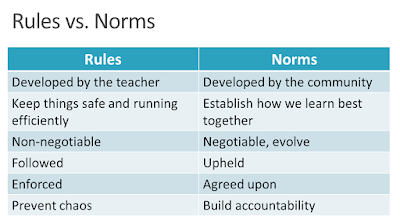 As I reflect on teaching a week of summer school, I've been thinking about the difference between classroom rules and classroom norms. Before planning this week of instruction, I had never thought intentionally about the difference. In fact, I'm pretty sure I treated them like the same thing when I had my own classroom or at least thought that if I had rules, I didn't need norms and vice-versa. My last year in the classroom, I shifted to starting the year with "norms" instead of rules, but in retrospect, they were actually still rules... called norms. While rules and norms do have some things in common, they are are truly two different things that have effects on different dimensions of our classrooms. The intent of rules is to establish a safe and efficient learning environment and maintain some order to prevent chaos, while norms are about collectively deciding as a community how learning will happen - it seems to me that both are needed in all classrooms.
Read more 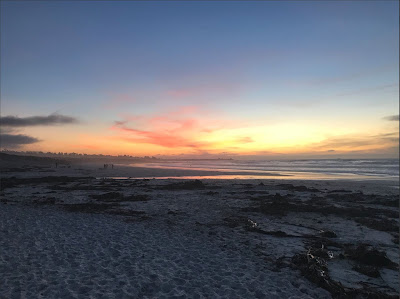 I still have sand in my shoes from CMC North this past weekend, and along with a major math hangover, that’s not a bad thing. I mean, check out this view: I got the chance to try out a new session with a fantastic group of participants ranging from 3 rd grade to high school teachers. Together we explored and experienced Mathematical Language Routines (MLR) from a powerful document that came out of UL/SCALE at Stanford this year. I first heard of MLRs when I was training to become a Master Coach for Illustrative Mathematics.  Their new 6-8 open source curriculum uses MRLs as supports for English Learners in a way that amplifies, not simplifies, the language of the mathematics. In addition to providing scaffolds for students to access the language, the 8 MLRs provide opportunities and structures for students to develop and communicate their own language. Here’s a cheat sheet: In my session we looked at a few of my favorite routines: Which One Doesn’t Belong? AKA WODB (an
Read more

Christine Newell
I am a Mathematics Consultant who loves math, teaching math, and supporting teachers in teaching math. I'm also a mommy, wife, friend, dancer, avid reader and M&M lover. There's a little bit of math in all of that as well. :)